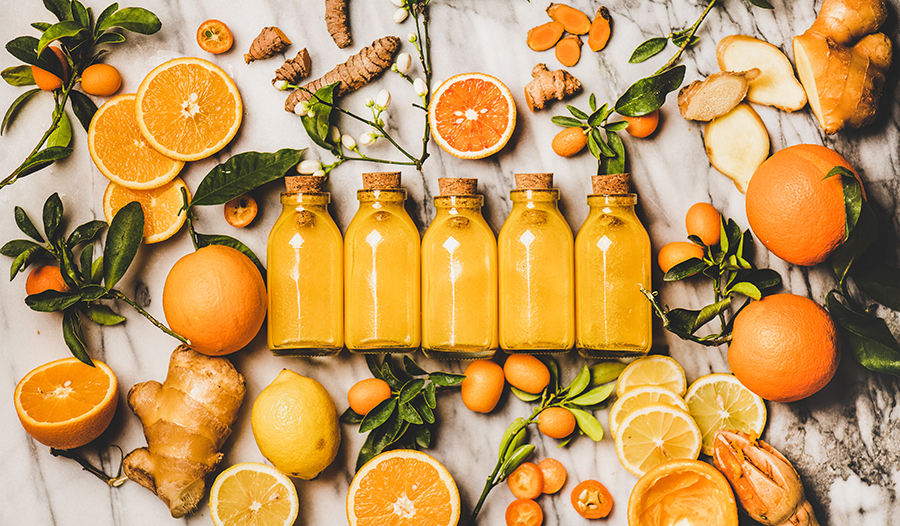 The immune system is a complex system that helps protect the body from harmful viruses, bacteria, parasites, and fungi. Divided into the types — innate and adaptive — this complex system must constantly differentiate between friendly and unfriendly bugs.

The innate immune system has many functions. One of its main jobs is to send immune cells to the areas of perceived or actual threats within the body in order to prevent the worsening of infection. This is similar to a general sending troops to protect against an invading army. The innate immune system also helps to stimulate the second part of the immune defenses, the adaptive immune system.

A healthy diet, adequate sleep, regular exercise, and stress reduction are important lifestyle choices we can make to help keep our immune systems function at higher levels. No medication or supplement can ever replace choosing healthy lifestyle behaviors.

However, there is evidence that certain supplements, vitamins, herbs, and adaptogens may provide an extra boost for those hoping to optimize their immune-system health when lifestyle choices are not enough.

N-acetyl l-cysteine (NAC), is the precursor to glutathione and a potent antioxidant. It is a derivative of the naturally occurring amino acid, l-cysteine. Glutathione is present in humans, animals, plants, and fungi. It helps to protect cells from oxidative damage and can help protect immunity. Studies1 show that higher blood levels of glutathione are associated with a reduced risk for illness and infections, especially in the elderly.

According to the Journal of Nutrition, almost 45 percent of Americans have inadequate intake of zinc, which plays an essential role in over 300 biochemical reactions in the body, in their diets. Worldwide, more than 15 percent of people are zinc deficient4.

As we age, the absorption of important minerals like zinc can be impaired. Additionally, poor dietary consumption of zinc-containing foods or routine ingestion of alcohol can also result in chronically low zinc levels. Zinc deficiency is associated with increased risk for infection and auto-immune conditions, according to a 2018 study in Nutrients5.

Vitamin C, also known as ascorbic acid or ascorbate, has been one of the most studied vitamins over the last 50 years. Research shows that vitamin C helps promote a strong immune system, among many other benefits.

A person with vitamin-C deficiency will have an impaired immune response, according to a 2019 study11. Suggested dose for most: 500 to 2,000 mg per day.

The reishi mushroom (ganoderma lucidum and lingzhi) is a fungus used in Eastern medicine. It commonly grows in hot and humid locations in Asia. The mushrooms can be consumed as a food, a powder, or in supplement form and are believed to have immune-stimulating benefits.

A 2003 study showed that the reishi mushroom could help increase the activity of NK or natural killer cells, which help kill viruses. A 2008 study12 showed the mushrooms could also help T cell function. Lastly, a 2019 study in Scientific Reports13 demonstrated the active ingredient in reishi mushrooms has antiviral activity. Suggested dose: As directed on the label.

A 2014 study in Nutrition Journal14 showed that the majority of people do not consume enough essential fatty acids in their diet. This is unfortunate as other studies show their immune-system benefits.

A 2019 study15 discussed how omega-3s could help strengthen both the adaptive and innate immune system cells. A 2017 study16 demonstrated how they play an important role within macrophage-infection-fighting cells, while a 2012 study17 showed omega-3s could help macrophages consume disease-causing bacteria.

Omega-3 fatty acids can be found in a variety of food sources, which include fish (mackerel, cod, and salmon are among the richest), walnuts, chia seeds, flax seeds, hemp seeds, avocado, and natto. Suggested dose: 1,000 to 2,000 mg once or twice per day.

Probiotics are beneficial bacteria, which can help with not only gut health but with overall health and wellness. Eighty percent of our immune system is in our intestines, which explains why beneficial bacteria can help keep us well. Consuming cultured foods such as yogurt, kefir, kombucha should be considered. When not enough, probiotic supplements are useful.

Probiotics play an important role in regulating our immunity. A 2009 study18 showed, “probiotics may have a beneficial effect on the severity and duration of symptoms of RTIs (Respiratory Tract Infections), but do not appear to reduce the incidence of (Infections) RTIs.”

A 2017 study19 of children also showed benefit. The researcher’s systematic review helped them conclude that the “use of Lactobacillus rhamnosus modestly reduces the duration of respiratory tract infections.”

Lastly, a 2017 study in Nutrients20 evaluated the use of probiotics and prebiotics in those receiving influenza vaccinations. Included in the study were 1,979 participants. The results show those who took the probiotics and prebiotics had a better immune response to the vaccination, meaning they had a stronger immune response and were less likely to become ill. Suggested dose: 5 to 50 billion units once or twice per day.

Panax ginseng is taken for a great number of medical conditions. The origins of this plant are in Korea, and it has been used for over 2,000 years since. Also grown in areas of China and Siberia, panax ginseng is unique — it should not be mixed up with other known ginseng, such as American or Siberian ginseng. Panax ginseng is also referred to as Korean ginseng, Chinese ginseng, or Asian ginseng.

The active ingredients in Panax ginseng are known as ginsenosides.

A 2015 study showed that ginseng “has protective effects against RSV (respiratory syncytial virus) infection through multiple mechanisms, which include improving cell survival, partial inhibition of viral replication and modulation of cytokine production and types of immune cells migrating into the lung.”

According to a 2020 study in the Journal of Ginseng Research21, ginseng reduces levels of inflammation-causing cytokines (IFN-γ, TNF-α, IL-2, IL-4, IL-5, IL-6, IL-8) produced by respiratory cells and macrophages. Further, the scientists concluded, “Most clinical trials revealed that ginseng, at various dosages, is a safe and effective method of seasonal prophylaxis, relieving the symptoms and reducing the risk and duration of colds and flu.” Suggested dose: As directed on the label.

Echinacea purpurea is a perennial herb that has been used for almost 2,000 years with its origins being traced back to the indigenous people of North America. Known to have potent antioxidant properties, the echinacea herb has been historically used to treat respiratory infections, urine infections, and skin infections. The herb has been shown22 to be safe to take long term for both children and adults alike.

A 2015 study in JAMA23 showed there was no benefit in prevention of a cold but that use of echinacea could shorten the duration of the common cold, suggesting it helps the immune system fight off an existing infection.

A 2016 study published in Holistic Nurse Practitioner24 demonstrated echinacea could help prevent the common cold. Other studies have shown similar findings. Echinacea is frequently consumed as tea, supplement, or as an extract. Take as directed on the label.

In my Southern California Practice, 80 percent of patients are vitamin-D deficient. The incidence is higher in less sunny climates. During the colder months, this deficiency is more common.

Vitamin D plays an important role in regulating the innate and adaptive immune system and their response to pathogens. According to a 2015 study25, “Vitamin D signals through the vitamin D receptor (VDR), a specific zinc-finger nuclear receptor.”

A 2018 study26 also demonstrated the importance of maternal intake of vitamin D during pregnancy and its role in a developing fetus’ immune system. The researchers concluded, “Vitamin D exposure during fetal development influences the immune system of the neonate, which can contribute to protection from asthma-related, including infectious, outcomes in early life,”

Vitamin D also appears to have antiviral functions. A 2019 study in the International Journal of Environmental Research and Public Health27 concluded that those with higher blood levels of vitamin D were at lower risk for upper respiratory infections compared to those with lower vitamin-D blood levels.

Lastly, a 2017 study in the Journal of the American Geriatric Society28 compared a standard dose versus a high dose of vitamin D in the elderly. Those who took the high dose vitamin D were 40 percent less likely to have an upper respiratory infection compared to the others.

Suggested dose: 1,000 to 5,000 IU is the most common dose taken. Those with elevated blood calcium should consult with their physician prior to supplementing.

Elderberry (Sambucus sp.), a flowering plant, has been used for hundreds of years for medicinal purposes by native populations all over the world. In recent years, elderberry’s popularity has caught on more widely. It is believed to help strengthen the immune system.

Additionally, a 2014 study31 concluded that elderberry could be an effective treatment for those with the influenza virus. Suggested dose: As directed in the label.

40,864 Views
How can we support our kids’ immune systems? A doctor explains how supplements like vitamin D, zinc, vitamin C, and more may provide natural immune support.

51,973 Views
Immune-supportive supplements and lifestyle practices to give your body an advantage including echinacea, vitamin D, zinc, probiotics, and vitamin C.

54,345 Views
While zinc and probiotics each offer support for your immune system and healthy digestion, when combined they are even more powerful.